Three Big Reasons You Should Not Feed Bears

Nearly everyone has heard the timeless warning, “Do not feed the bears!” You may be wondering, “What’s the big deal?” Well, it is a big deal, and we want to let you in on the three big reasons you should not feed bears.

Black bears hunt for and eat many kinds of wild berries, honey, nuts, and a variety of plants. Eighty-five percent of a bear’s diet is vegetation. The remaining fifteen percent of their food intake consists of fish, bees, insects, and other small animals.

They are great foragers, and all the food they need to survive is found in abundance in the park.

However, a bear enjoys the mouthwatering taste of grilled hot dogs and hamburgers with all the trimmings as much as humans do. Once a black bear gets a taste of human food, it wants more.

They have a keen sense of smell and the aroma brings them running. Unlike people, they relish eating out of a garbage can, from an abandoned picnic table, or along the trail behind you.

1. A Fed Bear is a Dangerous Bear

For the most part, bears ignore people, unless they feel threatened or think you have food. Since they do not naturally associate people with food, they rarely attack for that reason.

Bears are by nature afraid of people and prefer to avoid confrontation.

However, after a bear receives food from a human, it loses its instinctive fear of people. The desire for easy food overcomes its fear. Without this ‘built in’ fear, the bear approaches people in search for a quick meal. This makes a bear unpredictable, bold, and dangerous.

How dangerous do these bears become? Deadly. A bear that has eaten food provided by a human approaches people with no fear. Fed bears are aggressive and will kill and even eat human remains.

When a bear associates food with people, it will enter garbage cans, campsites, picnic areas, cars, and any place people keep food. It will come uninvited, fearless, and hungry. You do not want to get into a tangle with a hungry bear who thinks you have food or are food.

A bear that loses its fear of people and develops a taste for human food, never lives as long as bears that fear people and eat what nature provides. When left alone, black bears pose very little threat to people. They normally live out their lives in park bliss.

Sadly, out of ignorance or because some people purposefully ignore the restrictions put in place regarding the feeding of bears, some bears must be killed by park rangers.

Why? Because an aggressive bear becomes much too dangerous for the human population. These deaths can be avoided in most circumstances if we simply do not feed the bears.

Let’s put an end to, “A fed bear is a dead bear!” Keep your food away from the bears. Why not just view the wildlife from a safe distance of 50 yards (150 feet) or more, and never ever leave food unattended, or left as garbage on the ground. Garbage kills bears and a $5,000 citation or trip to jail may just ruin your vacation! 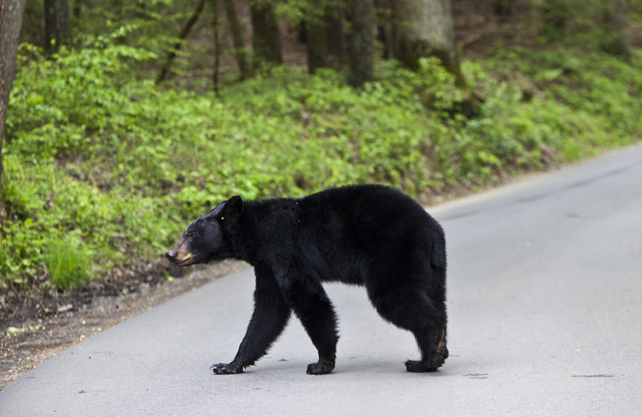 What to Do If You Encounter a Black Bear

The Best Place to See Black Bears in the Park