A Brief History of Cades Cove

Cades Cove is one of the most serene and pastoral places to be found anywhere on earth. The breathtaking views of pastureland, majestic trees, rolling hills, sunsets, and wandering animals are incomparable. 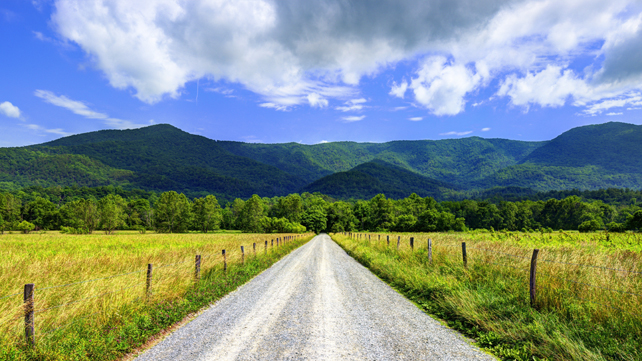 As one makes his/her way through this glorious valley, reminders are everywhere, that in the not too distant past, this place was also home to a small group of American pioneers.

A tour of Cades Cove is leisurely, with a calming and relaxing atmosphere. However, the lives of the early settlers were difficult, with struggles at every turn.

The Native Americans suffered and the settlers suffered, but in the end, this historic cove reminds us from where we came as a country.

Cades Cove is a 4,000 acre valley, located in Great Smoky Mountains National Park. Although it cannot be substantiated, some historians believe the area was named after Chief Kade of the Cherokee Indians.

No one really knows for sure, since there are no historical documents referring to how it got its name.

Many Cherokees lived nearby, hunted in the cove, and created trails through it, but they never lived inside the cove permanently. What can best be described as a “seasonal hunting camp” is the only remnant of Cherokee life found here.

In 1794, the State of North Carolina made a land grant of 5,000 acres to a pioneer named Hugh Dunlap in an area already known as Cades Cove.

It was not until 1819, with the signing of the Treaty of Calhoun, that the Cherokees forfeited any claim to the land and agreed to relinquish it to the United States of America.

During the following 19 years, a number of Cherokees dissatisfied with the treaty, wreaked havoc on settlers, making life in the cove dangerous.

The United States government implemented a massive relocation effort in 1830 for all Native Americans who refused to assimilate into the new American culture.

The idea was that all Native Americans, mostly in the Southeastern United States, must move west of the Mississippi River to a newly designated homeland.

The relocation was a disaster. Many Indians died along the way. This fiasco has since become known as the “Trail of Tears” due to the massive loss of life.

Since 1950, more than 6 million visitors to Cherokee, North Carolina have relived the story of the Cherokees through an outdoor play entitled, Unto These Hills.

Even though it was not legal to own land until 1819, at the signing of the Treaty of Calhoun, Cades Cove began to see its first settlers by people of European ancestry around 1818.

John Oliver and his wife, Lucretia, left Carter County, Tennessee with Joshua Jobe, who convinced them to stay after arriving. They did, but he didn’t.

The Olivers suffered through that first winter. They may not have survived without the generous assistance from friendly Cherokees. In addition, the family took shelter in an abandoned Cherokee hut.

Jobe returned in the Spring of the following year, and brought with him provisions for the Olivers. What they really needed was cattle. Fortunately, a couple head of cattle arrived along with him. 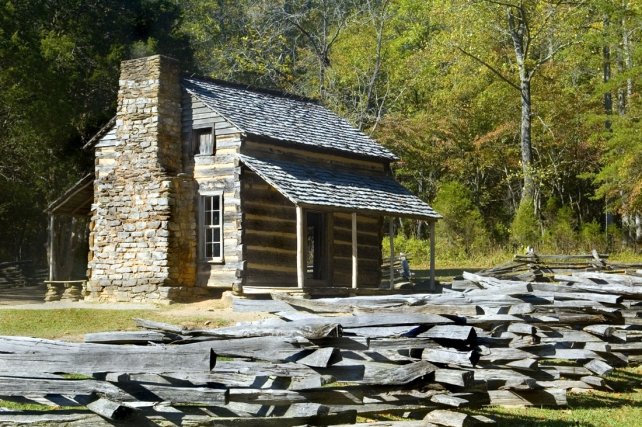 John Oliver and his family constructed a temporary home and then replaced it with a log cabin soon after. It was the first permanent home built in Cades Cove.

William “Fighting Billy” Tipton, famous for his service in the War of 1812, received a land grant in 1821. He consolidated the newly acquired 1,280 acres with previous holdings. He and his brothers, Abraham and Thomas, eventually owned most of the best agricultural land in the valley. 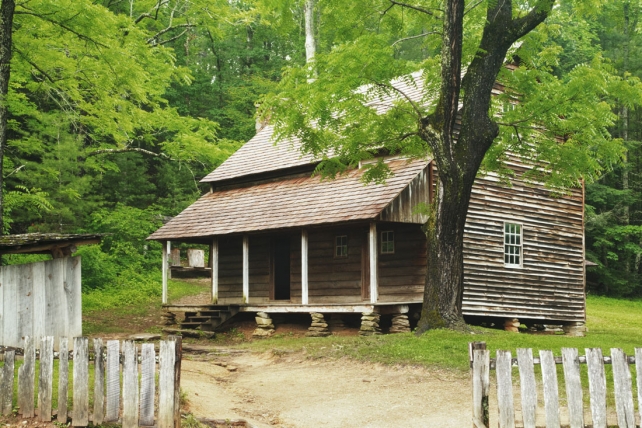 The people of Cades Cove were farmers, blacksmiths, and real American pioneers. They cleared the land, grew crops (primarily corn) and built barns to store the harvest and grist mills to process it.

Residents hunted the abundant deer and raised pigs for meat. They built smokehouses, barns, spring-houses, mills, and anything else needed to survive in somewhat isolation. The community grew and thrived. Then the Civil War came calling.

The Civil War brought division to the Cades Cove community. Legend says Cades Cove was a stop on the Underground Railroad before the war started. A pro-Union mindset was firmly rooted there.

Many residents sided with the Union. Others fought with and supported the Confederacy. The division created a tense environment to say the least. Neighbors disagreed with neighbors, and the community became splintered.

Confederate bushwhackers from North Carolina raided Cades Cove, killing Union supporters and stealing provisions. John Oliver’s son, Elijah Oliver, hid in the mountains until it was safe to return after the war. Many others chose not to return at all.

The population of Cades Cove languished after the Civil War. Consequently, the economy struggled in isolation. Not until the early 1900’s did things begin to turn around when the community moved from farming and agriculture to logging.

Another development after the Civil War was the making of corn liquor. They grew plenty of corn, and corn-based alcohol followed. A few men made homemade brandy from the fruit grown on their land.

Prohibition brought opportunity for the creation of illegal alcoholic beverages called moonshine, brewed at night by the light of the moon. The Cades Cove community continued as a living, working community for more than 100 years.

Then, in the late 1920’s, the United States government determined to create a national park by buying land with $5 million donated by the Rockefeller family and another $2 million of taxpayer dollars.

As one would expect, the people of Cades Cove objected to selling their land, and they fought back hard. The U.S. government promised the landowners in Cades Cove they could keep their land and remain separate from the park.

However, the government reneged on their agreement. They used eminent domain to confiscate the land in Cades Cove. Lawsuits ensued, and although he won the first court case, John W. Oliver, descendant of Cades Cove’s first settler, could fight no longer.

He accepted his fate and abandoned his home in Cades Cove on Christmas Day 1937. He was Cades Cove’s last resident.

The Primitive Baptist Church, about which you will soon read, continued to meet in their building in defiance of the U.S government, until 1960.

From the very beginning of the settlement, Christianity was an important part of life in the cove. 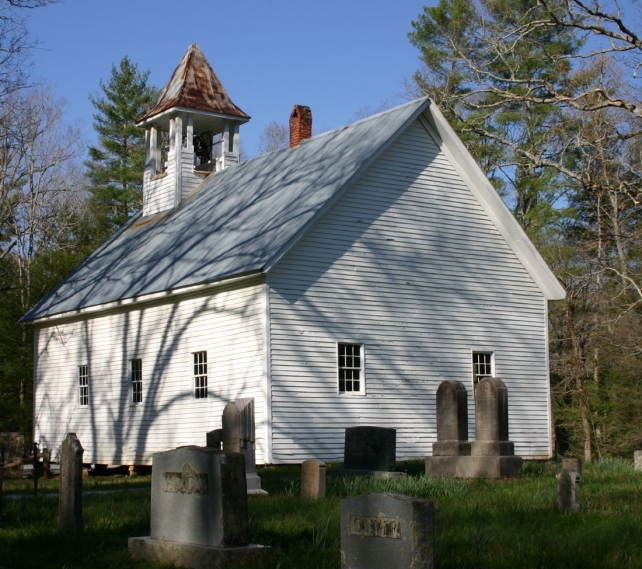 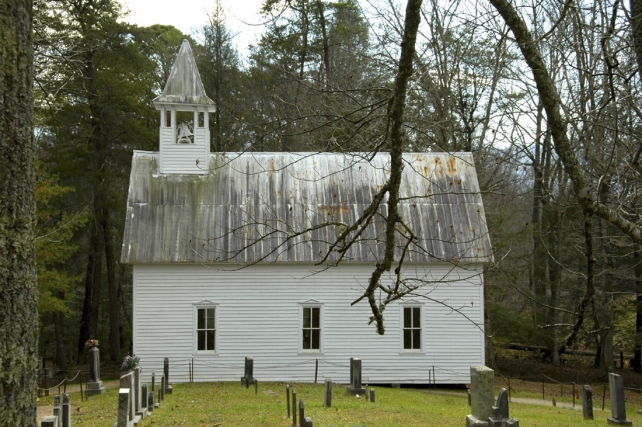 The current church buildings are not the original log buildings used by the churches; they did not survive. These churches replaced the older ones, are still standing, and can be toured by visitors to the park.

Footnotes: I would like to thank A. Randolf Shields, author of the book, The Cades Cove Story, for his invaluable research into the history of Cades Cove. Some of the historical facts in this article were learned from his excellent book.